Ready to invest in BigSolar plants in Serbia 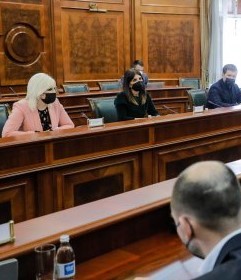 On May 5th 2021, an important meeting took place between the Serbian Deputy Prime Minister and Minister of Mining and Energy, Prof. Dr. Zorana Mihajlovic and the delegation of SOLID, led by CEO Stephan Jantscher, to discuss the possibilities of cooperation and investments in solar plants in Serbia. The Austrian Ambassador to Serbia, Nikolaus Lutterotti, also attended the meeting.

Mihajlovic drew attention to 4 new laws in Serbia, concerning energy and mining, including one that aims to promote the development of renewable energy sources such as solar, hydro and gas plants. She pointed out how important investments in renewable energy for the country are.

"We want as many companies as possible to be involved in renewable sources in Serbia to build water, gas and solar plants and contribute to the reduction of carbon dioxide emissions," she said. “Energy and environmental security on the path of energy transition and green energy is important for Serbia. Our goal is to get 40 percent of energy from renewable sources by 2040," she stressed.

"Together with Serbian partners, we have studied the market and conducted promising feasibility studies for several cities to assess the potential of solar thermal systems. We are ready for detailed design and construction of solar thermal systems. We can provide the technology and the experience, have been acting in the market for over 30 years, and we installed more than 300 systems worldwide," Jantscher said.

SOLID highly values initiatives of the Serbian EBRD (European Bank for Reconstruction and Development) such as the "REDEWEB" programme, as it supports investments in renewable heat supply for cities.

SOLID's sales manager Hrvoje Milosevic pays special attention to coordinating the needs of some Serbian cities, for which feasibility studies have already been prepared or are in progress, and the needs of the EBRD.